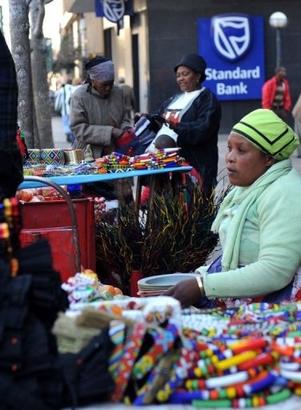 It’s inevitable that the people responsible for driving development projects in underprivileged areas come to this work with their own middle class assumptions of what constitutes progress, and of how poor people behave.

But being alive to what is really going on in these places is an absolute pre-requisite if the social investments and other attempts at good giving are to be effective and relevant. That means learning all the time, often about things that are right before our noses, but that we don’t see.

A bunch of these lessons and insights have helpfully been pulled together in the book “Kasinomics” by GG Alcock, and are being presented to companies attending this year’s Nation Builder IN GOOD COMPANY conference on 30 August at the Atterbury Theatre, Lynwood, Pretoria (www.ingoodcompanyconference.co.za).

Alcock is head of a marketing agency that designs bespoke township campaigns for products and brands, and he has a unique background – being white but growing up in KZN’s Msinga, a rural Zulu community without running water or electricity.

It is worlds away from his current circumstances, but it has helped define what he does now. In Kasinomics (“kasi” being a play on the old formal description of townships as “lokasies”), Alcock describes some of the missteps we sometimes make in understanding how SA’s townships are evolving, what drives business in these areas, and how they are best approached in product campaigns.

The first error he points to is when we think of townships as essentially places of depressed economies and mindsets. On the contrary, they are often places of vibrant entrepreneurship, the very thing that government policy says it wants to see arise.

Moreover, poverty itself doesn’t equal unhappiness, with people showing pride in sometimes very poor physical circumstances and with love of home often being utterly independent of material realities. So strong are social bonds in many townships that when people’s circumstances allow them to move out and to buy into suburbia, they often prefer to stay put, building mansions alongside shacks in higgledy-piggledy developments that defy urban planning predictions.

Sometimes whole economies pass us by. Everyone’s aware of a black market dagga market, but how many realise its scale, as Alcock describes it – from pump-irrigated fields on the Tugela, to transport businesses reliant on its distribution, on to urban markets in a chain that lifts the price of a bag of the illicit weed from R5000 at source to R400 000 in Johannesburg? Then there’s the multi-billion rand business in providing plants for traditional medicinal use, and yet it’s one that hasn’t spawned any formal farming of these increasingly rare plants in response to market demand.

A misconception exists that people easily abandon culture or habits of upbringing because they’re modernising, as though this were the same as westernising. It’s the sort of error that had Parmalat want to sell its premium individually-wrapped cheese slices into township markets to be used in school lunch boxes, only to find market heaven when their cheese slices became instead a sought-after ingredient of “kotas”, the ubiquitous quarter-loaf-polony-chips-egg takeaway of some townships.

Similarly, Alcock’s Minanawe Marketing helped Jeyes Fluid to dramatically increase market share by positing this cleaner as something else too – a warder off of “bad things”, playing into long-established cultural beliefs and usage.

Perhaps most uncomfortably for people involved in business-driven social development work is Alcock’s assertion that traditional giving to good causes works less well when it doesn’t demand a quid pro quo from beneficiaries.

Here’s he points to a campaign by long-life milk producer Bonnita at Eastern Cape schools, backed by radio advertising. This rewarded schools with teaching and sports gear depending on the number of used Bonnita milk cartons collected, with hugely increased sales.

Alcock calls this type of reciprocity between donor and recipient the most culturally appropriate approach to good giving – a thing of “ziyagezana” (the hands wash each other). It’s the ultimate argument in favour of cause-related marketing.

Register for the IN GOOD COMPANY briefings at www.ingoodcompanyconference.co.za